Mother’s Day and Teacher Appreciation Week: The Most Unsexy Jobs of All

You can smell Jakari from eight feet away. The combination of unwashed clothes and hair, shoes that have seen an extra winter of wet and dry feet. As if that didn’t already put her in the shallow end of the popularity pool, she weighs in at least forty pounds above the average fifth grader.

There is something so incredibly unsexy about any profession that gets an appreciation week. Teacher appreciation week shows up at the same time each year as nurses week, and quite honestly, both professions boil down to dealing with other people’s feces, literally and physically. Is it any wonder that Mother’s Day is only five days away? The role of mother falls solidly in the “dealing with feces” category.

This week is full of small gestures of thanks. Cups filled with chocolate, vases filled with flowers, boxes filled with jewelry. My cynical self can start to wonder if these appreciation weeks and days are lip service, a compulsory nod, the thank you we throw over our shoulder at the cashier as we take our receipt. As if that could possibly match the contributions our mothers and teachers have made to our lives. 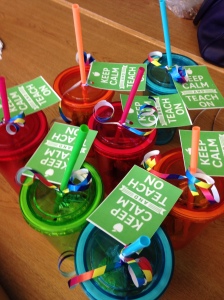 This past two weeks my sweet little toddler has learned that he can have an opinion, and that it is most exciting when that opinion goes in direct opposition to mine. I can’t blame him. That’s his job, to figure out the boundary lines of mommy and baby, to test the limits of my patience, to experiment with the rules until he learns them all, and then to experiment some more to make sure I wasn’t kidding.

But last Sunday morning was tough. It started with screaming and didn’t stop for almost three hours until he collapsed asleep in a pile, just in time for us to pack him in a car to head to church. He woke up, of course, right when we walked into church fifteen minutes late (also of course). The sermon had started and I knew his dazed cuddling was a ticking clock, no way it would last. Sure enough, the angry fish flopping started as soon as I told him he couldn’t run around in the pew.

I took the elevator up to our church’s nursery, my son upset, again, because he didn’t get to push the “up” button. I pushed into that deep inner resolve, the one I channel when I need to stay calm in trying situations. And maybe there was a little bit of self-pity. You know, the “I deserve a break” or the “somebody should be helping me right now” feelings. The “I deserve a holiday to celebrate my massive contributions to my son and society” feelings.

And at that moment, right as the elevator doors chimed and opened, my son turned to me, put his tiny, perfect, chubby hands on my cheeks, grinned with his lovely twelve teeth and his tiny dimple, and said, “Mama.”

He spoke the words with the awe and wonder that I so often feel for him. This incredible realization that we are part of one another, that our lives are forever entwined with cords stronger than DNA; that we are sewn together with love.

I had surgery recently, and I was desperate for help during the recovery that the doctor had misled me to believe would only last a few days and has instead continued for six weeks. Within a few days of the surgery my mom caught wind that I was struggling, rearranged her schedule and drove down to spend a week caring for me, cleaning my house, cooking my meals, and most notably: waking up with my son to spend the mornings with him. (Is there any greater gift than this?)

I often turn to my husband, when my mom is at our house and caring for our every need, or when his parents have extended some truly incredible gift of generosity, and ask how we could ever repay our parents for all they have done for us. We are disgustingly fortunate to have such loving and supportive parents. And he often will say, “We can never repay them. We can only pay it forward.”

And that’s what I keep thinking as I watch Jakari’s teacher sit down next to her and teach her to read, inviting her after school, allowing her to keep her siblings in the room during homework help, since Jakari is their primary caretaker. Jakari is still so often ornery in class, still bullies other students, still talks back. And yet her teacher comes back each day with a deeper resolve to help Jakari learn to read and write. Could Jakari ever pay her back for this?

Maybe Teacher Appreciation Week and Mother’s Day (and Nurse’s Week) help us to remember that there is no way that we can ever repay the people who have loved us, who have parented us, who have shown grace to us. No chocolates or flowers, stuffed animals or crayon-scribbled cards could ever repay the mothers, biological or otherwise, who have nurtured us.

But maybe those sentiments are a statement, a reminder that there is enough grace to go around, that we are all better when someone loves us more than we deserve, more than we could ever repay.

And maybe these appreciation weeks and days are a chance for us to turn around with awe in our eyes and acknowledge those people who have loved us well. Not because we can pay them back, but because their love has allowed us to pay it forward. 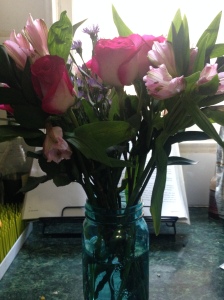 It Takes A Butthead to Know One

A little over a month ago I was at the point of collapse. I knew I was leaving my job, but I didn’t know what was coming next. I was living in the perpetual sleep deficit fog that has become my life as a mother. I was starting to fantasize about winning a trip to pretty much anywhere in the world for a break from my life.

Enter the advice of a good friend: It’s time to go get a massage.

Massages are religious experiences. In an hour a massage therapist can work out tension and stress that weeks, nay months of yoga classes (which I do not attend, btw) cannot. A salon near my house could squeeze me in for a same-day massage, so I ran out of the school building in time to make my appointment.

In a hurry I parked my car, jogged to the store, slowed down enough to pretend I wasn’t winded from the block-long trek, and walked casually into the salon.

The massage was perfect.

The message I received after the massage was not. When I returned to my car there was a note stuck to the window. In silver sharpie (such a waste for such an amazing product) someone had scrawled: 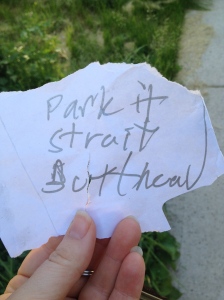 And, I want to remind you, I was at the point of meltdown.

I sat there stunned. There was the spelling issue, obviously, but I couldn’t believe that someone had been so upset with me that they ripped up an envelope in their car, found a marker, then gotten back out of their car to leave me a note under my wipers. Who has time for that?

When we’re driving together, my husband has to regularly remind me that the other drivers on the road are not driving with the intention of making me angry. For example, to my, “what the &@#% is that person doing” my husband might say, “They’re probably just in a hurry.” To my, “THAT IDIOT JUST CUT ME OFF!” he might say, “I’m sure they’re just as frustrated with traffic as you are.”

Rereading that it sounds a little patronizing, but his tone and intent are anything but patronizing. My husband lives by the phrase, “Everyone is just doing the best that they can.” And he offers me the grace implied by those words.

Sometimes I think about the lessons I want to teach our son. I have lofty goals of writing them down and making a family creed. And I have to say that this note on my car got me thinking about rule number one: Don’t be mean. (Well, technically, don’t be an a**hole, but I should probably introduce the rule as “Don’t Be Mean”, since another rule is “Watch What You Say”.)

In my new job as a coach, the coaching team takes the task of “coach” quite seriously, including coaching one another. One of the areas in which I’ve gotten feedback is that not everything I think needs to be said. For those who are my personal friends, this might make you laugh. I have a way of speaking “no filter” that can get me into trouble.

Put another way, “Just because you can doesn’t mean you should.” 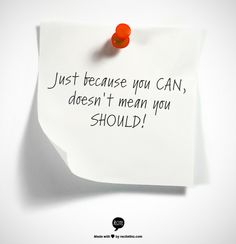 So I kinda of feel for the man who left me that note. I can guess at the anger he felt upon seeing the last available spot in the lot, only to realize he would have to wedge his car back and forth to fit into it. Maybe there was a line of cars behind him, honking to get past. Maybe he was coming from work, or leaving to go to work, and this made him late. Maybe he, like me, has a child, and the way I parked made it impossible for him to squeeze the carseat out of the door, so he had to walk around the car. Or maybe he’s just a meany. Maybe he wrote that note to feel the rush of indignation while sliding it onto my windshield.

I will never know.

Just like that man, I have a tendency to get lost in the moment and cuss at the car in front of me. Or to speak my mind without thinking through the ways it might hurt the people around me. (I can always apologize later.) Or to leave a scathing comment on a blogpost. (I don’t know the person, who cares?)

Thanks to my new job I’ve been practicing the art of holding my tongue. Keeping my job is good motivation. In true elementary school fashion, the walls of the school we meet in has the acronym “THINK” posted throughout the building: THINK before you speak: Is it True, Helpful, Important, Necessary, Kind? It’s cliche and I rolled my eyes the first forty times I walked past it. 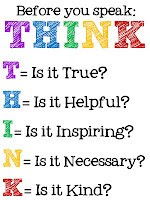 But like so many of those overused phrases, it’s got a point. Maybe before I pick up the sharpie to write my comment, it is worth taking a pregnant pause to consider that everyone is just trying to do the best they can. Even when driving. (Or parking.)

It’s kind of shocking how much less I’ve been saying lately.