There was bird poop on my porch steps this morning and I was elated. Because where there is bird poop, there is a bird who is chirping the message that spring, spring, spring is almost here (in weather, I mean, I am aware of how the equinox works).

Therefore, in celebration of the fact that it is spring, complete with showers, and the fact that our staff bathroom had toilet paper in it today (it’s the little things people), I am writing an uplifting piece about the milestones I (and my husband) have reached as a parent in the first seven and a half months of my son’s life.

Let me preface this by saying that I went into this whole parenting thing already sort of an expert. I teach, after all, and therefore know a thing or two about kids. So these milestones go above and beyond those basic achievements.

Now it’s time to report back on how well we have excelled as parents. Here goes: 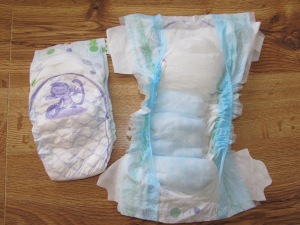 While using cloth diapers it was not unusual for me to change my son’s diaper, put him down for a nap, and have to change his diaper again before he had fallen asleep. Ain’t nobody got time for that. I’m not sure if it was me or my husband who got the brilliant idea to switch to disposable diapers at nights so that we could sleep in longer than 15 minute increments, but I think we both knew that once we made that concession, we were well on our way to becoming a cloth-diaper-free house. And so it was that within two months we earned ourselves the Disposable Diaper Achievement.

We don’t own a TV at our house, a fact that saves a lot of time when Comcast tries to offer us their latest amazing deal. But we do own a computer and a Netflix subscription. Let’s be honest, that’s at least as good as a TV, and makes the opening statement of not owning a TV immediately less impressive.

My husband read a book that told us to limit screen time for children before the age of two. A worthy challenge. For the first few months of our son’s life we were careful to always point all computer or phone screens away from his face. Amateurs.

Anyway, the author of this book has clearly never been stuck in Chicago’s rush hour traffic with a screaming child, having already sung all verses of every song you’ve ever heard, exhausting all possible items of interest pulled from every bag and purse in the car. If the author had been in this situation, they too would have earned the Responsible Screen Time Award, an award that goes out to any parent who, in a moment of panic or fatigue, is able to use technology to soothe or distract their child.

If you need any assistance with earning this award, might I suggest a free download of the app “Magic Fingers”. You’re welcome. (I also endorse youtube videos.)

At his four month appointment, the pediatrician told us we could start feeding our son rice cereal. My husband and I gave one another knowing glances. It was really a shame to see our pediatrician so behind in the baby food conversation. Doesn’t he know that rice cereal causes diabetes, is probably full of arsenic, and will make our child obese?

When he asked us directly, we smugly answered that we were making our own baby food. What we meant was that we have a food processor and intentions of peeling, pureeing, and storing our own homemade (organic) baby food. We hadn’t actually MADE it. (Our pediatrician gave us a sympathetic smile and said, “God bless you guys. But seriously, Gerber baby food is good, too.”)

Several days after the appointment I happened to be at Babies R Us, and there happened to be a sale on organic baby food. I picked up a box of twelve little jars. After all, we needed more storage containers for our homemade food.

It’s been three months since then and to date we have boiled and mashed one sweet potato. It wasn’t an organic sweet potato because Costco doesn’t carry organic sweet potatoes. Our son didn’t seem to mind. And that is how we managed to put ourselves on the list of parents who have earned The Best Intentions Organic Homemade Baby Food Honorable Mention.

There have been a few other important milestones so far including, but not limited to, “Allowing Your Child to Sleep in His Swing Until the Swing Stops Swinging” Award, and the “Supplement With Formula Because Pumping More Than Once A Day At Work Is A Pain In The You Know What” Award. And let me not forget our newly achieved “Using Food To Stop Your Child From Screaming At Target” Award.

I am sure we have many, many more milestones to hit before we’re done. (Perhaps some will be shared by all the veteran parents in the comments section below.)

As my mother-in-law says, “Parents have to do what works.” (She gave very similar sex advice to us when we got married, but I digress.)

In any case, I’m proud of all we’ve accomplished so far. It makes me pretty excited. Almost (but not quite) as excited as seeing bird poop on my back porch.