Hugs, Duct Tape, and Learning to Be Brave 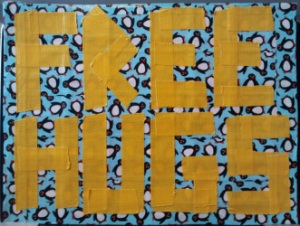 I met David while teaching the youth group at my church. He was a freshman in High School, just starting to figure out who he was and what made him tick. But two things were certain: he loved duct tape and hugs.

I really liked David, but I’ll be honest, I didn’t really get him. Or maybe, I thought he was a little weird. Or maybe he made me a little uncomfortable.

While other kids were talking about movies and video games, David was making wallets and flowers and his tux for prom out of duct tape. And did I mention that he was hugging everyone all the time? Maybe it’s just my neck of the woods, but it is kind of rare to find a sixteen year old eager to hug adults.

But David did not allowed being different to stand in the way of being himself. He took his dream of giving hugs on the road, writing a book and using the money to travel across the country to give free hugs, over 50,000 hugs to date, tracking each with a counter hanging from his belt. He even has his own website, “Duck Duct Dave“.

I think he made me so uncomfortable because I was so miserable being a teenager. I worked hard to disappear, wishing I could blend into the crowd. I didn’t try out for the school musicals despite the fact that I love to sing and dance. I was too fat. Or at least, that’s what I told myself. I couldn’t imagine flaunting that fact in front of my graduating class of 500 students. From time to time I imagined myself trying out for the musical, applying for student council, or going to the extra curricular events, but in the end I stayed at home, convincing myself I didn’t want any of that anyway.

Why is it so hard to be seen? And why does it make me so uncomfortable to see someone willing to leave it all out there, heart on the sleeve, and dive headfirst into their dream?

Oh that’s right, because people can be jerks and the world can be mean.

David estimates that while standing on the street with his free hugs sign, about ninety percent of people walk past without giving him a hug. That’s a lot of rejection. I did a catering gig once and I felt rejected when I couldn’t convince the wedding goers to take the bruschetta I was offering.

Rejection hurts. When I hear ninety percent rejection a big mama piece of me wants to usher David into my house, feed him some chocolate chip cookies, hug him, and protect him from all of that.

But I’m pretty sure David is right and I am wrong. At least insofar as there is a right and wrong here.

I think in High School I thought there would come this magic moment when I would no longer be afraid to walk out on that stage. Or better yet, I hoped to avoid the fear altogether by having someone notice how amazing I was while I was sitting camouflaged in the corner.

But David has taught me a thing or two. LIke, don’t wait to be seen, just hit the streets with a loud neon sign. Maybe ninety percent of people won’t give a damn, but show up for the ten percent who do. Or better yet, just show up.

David is in college now so I don’t see him as often. When I do, I make sure I hug him extra hard, and I find it really satisfying to watch him click his counter and know I’m helping him live his dream.

And like all the best teachers, I am sure he has no idea how much he has taught me. But I am part of the ten percent who are thankful he has had the courage to show up and have the audacity to be himself.

6 responses to “Hugs, Duct Tape, and Learning to Be Brave”